Get Hard or Your Money Back. Start Here

Sex
Back to Blog

Red, White and BOOM: How Americans Celebrate Independence Day Between the Sheets

For most Americans, the Fourth of July is a time for beer, barbecues and big, brilliant fireworks shows. Some of us, though, keep the fun going.

If you’ve ever set off some fireworks of your own in the bedroom (or anywhere else) on Independence Day, you’re far from alone.

In fact, 75 percent of Americans have had sex on the Fourth. That’s more than the percentage of Americans who actually supported independence back in 1776 — there weren’t pollsters back then, but it’s been estimated that anywhere from 33 percent to 45 percent of eventual U.S. citizens supported the war against Britain. 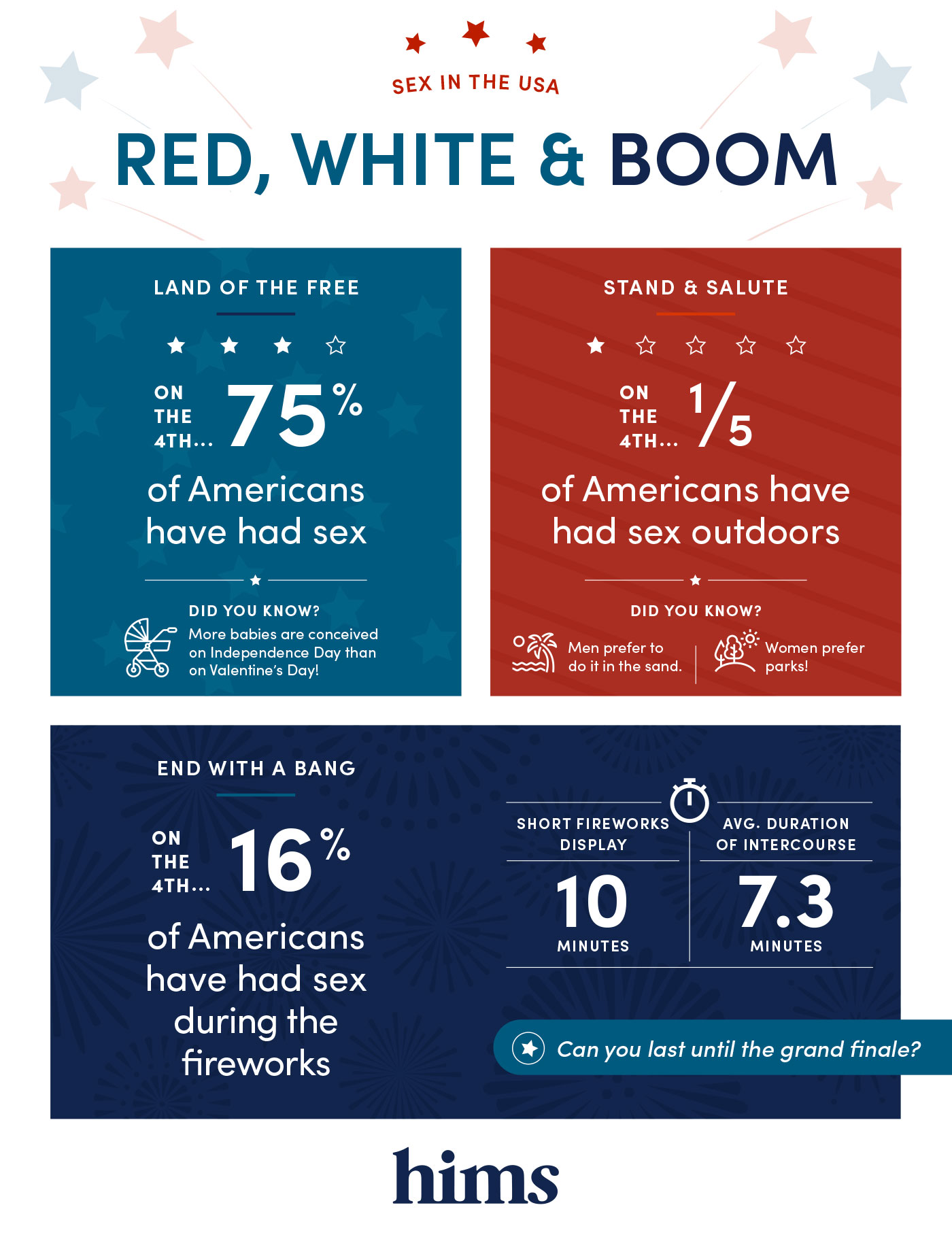 It’s a good thing for us that those die-hard patriots got it done with a minority, so a majority of us can live free and get it on. Americans are no strangers to over-the-top patriotic celebrations, which could explain why 25 percent of us have had sex during an Independence Day party.

One way you can celebrate is by sneaking off with someone special to have some fun in the great outdoors. More Americans (77 percent) have had sex outside than have had sex on Independence Day, even though it can technically get them arrested on misdemeanor charges anywhere in the United States if the wrong people found out.

If you must get your freak on outside, try to find a secluded place. Of course, “secluded” is subjective. It depends on a variety of factors, including the time of day, the location’s accessibility, and the weather.

They don’t call it the “Home of the Brave” for nothin’. Although a sunny beach doesn’t give much privacy, 47 percent of men think of beaches as a good place to have sex. On the other hand, slightly more than half of women would rather get down in a park.

It might be harder to find privacy on sandy shores, but there’s significantly less risk of catching Lyme disease. Safety first, folks! And watch out for sand!

Yankee Doodle keep it up

Prefer a less risky alternative to public indecency? Fireworks almost always happen at night, and they are always loud affairs. You could get your freak on during the fireworks show and save your grand finale until the last big explosion. According to our sources, a brisk fireworks show will last for about ten minutes, while the median duration of intercourse is about 7.3 minutes.

If you’re wondering about that stat, researchers apparently figured this out by giving 1,500 women stopwatches and asking them to time the action themselves. That seems like the sort of thing that would impact how long things last, but we’re not sure if it’d make for longer or less sexy time. It probably depends on how turned on you are by stopwatches.

If you’re concerned about being able to outlast the final blast, we’ve got some solutions for a too-soon kaboom, too.

Conceived on the Fourth of July

By working backwards by 38 weeks from a given birthday, The Atlantic managed to figure out the relative baby-making popularity of every day on the calendar. Babies conceived on the Fourth would most likely be born on March 27, but that’s way down on the list as the 225th most popular birthday.

But the extended Thanksgiving weekend and Halloween both handily surpass the Fourth in terms of the number of babies conceived. Pretty spooky, but also filling.

But you might be surprised by which sexy day is less popular than Independence Day for baby-making.

Despite a deluge of corporate marketing that seems to kick off as soon as the calendar rolls over, Valentine’s Day is only the 236th most popular date of conception on the calendar. Roast turkey and candied yams are apparently more enticing than both fireworks and footlongs or flowers and fancy candies.

Are you getting ready to get it on for the Fourth of July? We can help you reach whatever patriotically sexy goals you have in mind.

Stand and salute, America! But if you’re standing and saluting for more than four hours, please seek medical attention.

get hard or your money back