To the excitement of movie buffs and comic fans alike, the premiere of Avengers: Endgame is quickly approaching. This film is the culmination of over 20 films in the Marvel Cinematic Universe, which have built a dedicated worldwide fanbase. But some fans have a different way of expressing their appreciation for their favorite superheroes. 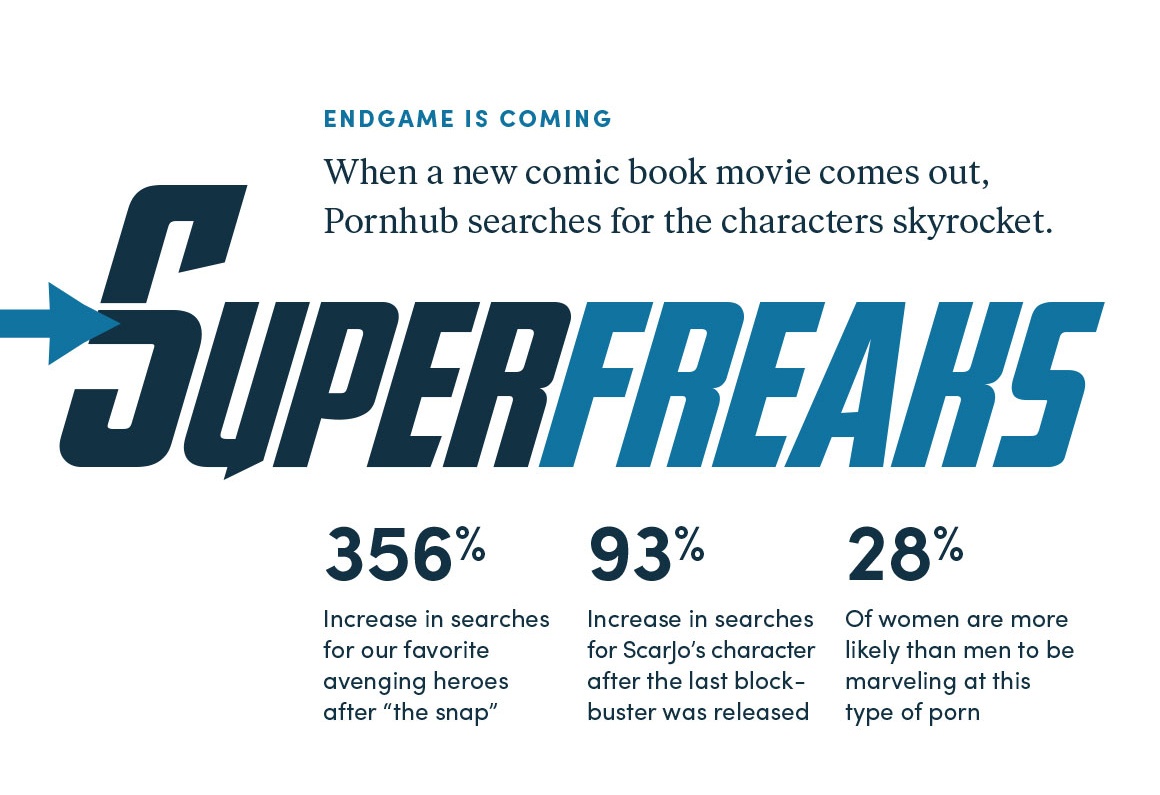 Natasha Romanoff is a mysterious and alluring figure who was trained as a deadly spy and assassin, which means she's likely to be up to experimentation. Those positions you’ve always wanted to try? She’s the perfect partner to test them out with. And while you might feel you’re the one in control, don’t kid yourself. Natasha is always the one calling the shots, although she may use her powers of psychological manipulation to allow you to think otherwise. As for kinks, all those years of espionage and adopting various personas have likely developed into an affinity for role play, so bust out the wigs and costumes.

Peter Parker isn’t exactly subtle about his super abilities. Scaling skyscrapers and swinging through the streets of New York City, he’s a little bit of a show-off, a trait that definitely carries over into the sheets. But don’t worry, he’s also full of energy and extremely eager to please and impress you in any way he knows how. With his acute spider-senses, he’s completely tuned into your pleasure and knows exactly what you need to feel good. If you’re shy, though, Peter may not be the ideal partner for you — with his natural extroversion and tendency to draw attention to himself, he’s totally into exhibitionism.

Cap is the number one most-searched male character on Pornhub, and for good reason. His physique was enhanced to be the pinnacle of human perfection, and as an all-American boy who was born in the 1930s and fought in World War II, his chivalry knows no bounds. This super soldier uses his powers for good: You’ll have his full attention and he’ll show you how truly generous and caring he is. Plus, with his nearly limitless strength and endurance, he can go for hours without getting worn out. You know the incredibly selfless Steve Rogers’s favorite move is oral sex — giving, not receiving.

When you get down and dirty with Bruce Banner, don’t expect him to leave his emotions at the door. This guy has some serious baggage, and he’ll channel all of it into one passionate, memorable encounter. Don’t forget about his regenerative abilities, which mean he has the power to heal himself from any roughhousing you’ll engage in. Trust us, this will come in handy because if there’s one thing the green guy is into, it’s playing rough.

The king of Wakanda will take all the necessary measures to make you feel like royalty. His enhanced strength and agility make for one masterful and inimitable partner, and his regality will make a powerful impression on whomever he chooses to make his queen. Having sex in public is particularly thrilling considering his superhuman senses because, with the ability to sense anyone coming, there’s little real danger of getting caught.

Do you love being with a partner who can really get inside your head? Look no further than Wanda Maximoff, Marvel’s resident witchy woman. Her abilities to manipulate chaos magic and alter reality combine to create one mind-blowing experience that will have you looking for more. More than anything, this girl loves to use her powers to tease  — she’ll have you at her mercy in no time.

It doesn’t get much better than being with a literal god, especially one who’s skilled with a hammer...if you know what we mean. His immense strength will make you feel protected, while his power to summon thunder and lightning will seriously rock your world, even if it’s slightly overdramatic. But he’ll really have you going once he launches into his dirty talk, which will somehow manage to sound Shakespearean while also being a major turn-on.

If you’re expecting anything more than a one night stand with this genius, billionaire, playboy philanthropist, you’re bound for disappointment. On the plus side, if you’re into confident and intelligent men, Tony Stark is your guy. This narcissist is a fairly selfish lover who’s more into receiving oral sex than anything else, but rest assured, he’ll still make you scream his name...because he wants to hear it.