Give Us an O! All About Orgasm Day (and Why it Matters)

Gentlemen, when you think of your favorite holiday, what comes to mind? Christmas? Thanksgiving? National Meatball Day? We're not saying those are bad holidays, but we are saying it might be time you expand your horizons. What if we told you there was a magical day — one supreme day out of the year — that blows all the other commemorative annual celebrations and Hallmark holidays out of the water? Well, that's exactly what we're about to do. Fellas, let us since you the song of our people — National Orgasm Day.

That's right. National Orgasm Day. It falls on July 31, and if you haven't yet received the memo, now's the time to learn you somethin'.

What’s the big deal? Unless you’re completely celibate, an orgasm might very well be the high point of your day, week, month or year. But men generally get to enjoy an orgasm more frequently — and more easily — than women.

Noticing this discrepancy, and wanting to repay the “sexual debt” he felt he owed to his wife, Brazilian councilman Arimateio Dantas introduced a local resolution in 2007, making it illegal for men to finish without helping their female partners climax, too.

This local law originally established “Día Internacional del Orgasmo Femenino,” or “International Day of the Female Orgasm,” on August 8. However, as other countries began noticing the holiday, it underwent a few changes and wound up occupying a new place in the calendar.

National Orgasm Day is, like its progenitor, a celebration of the orgasm (and you can read more about it from a female perspective on our sister site Hers). We can celebrate Orgasm Day in the best way by striving to develop healthier attitudes towards the big O, for both men and women.

Let’s take a look at some facts behind the climactic moment, to better understand why Orgasm Day exists, why it matters and how you can be a more orgasmically-generous partner. 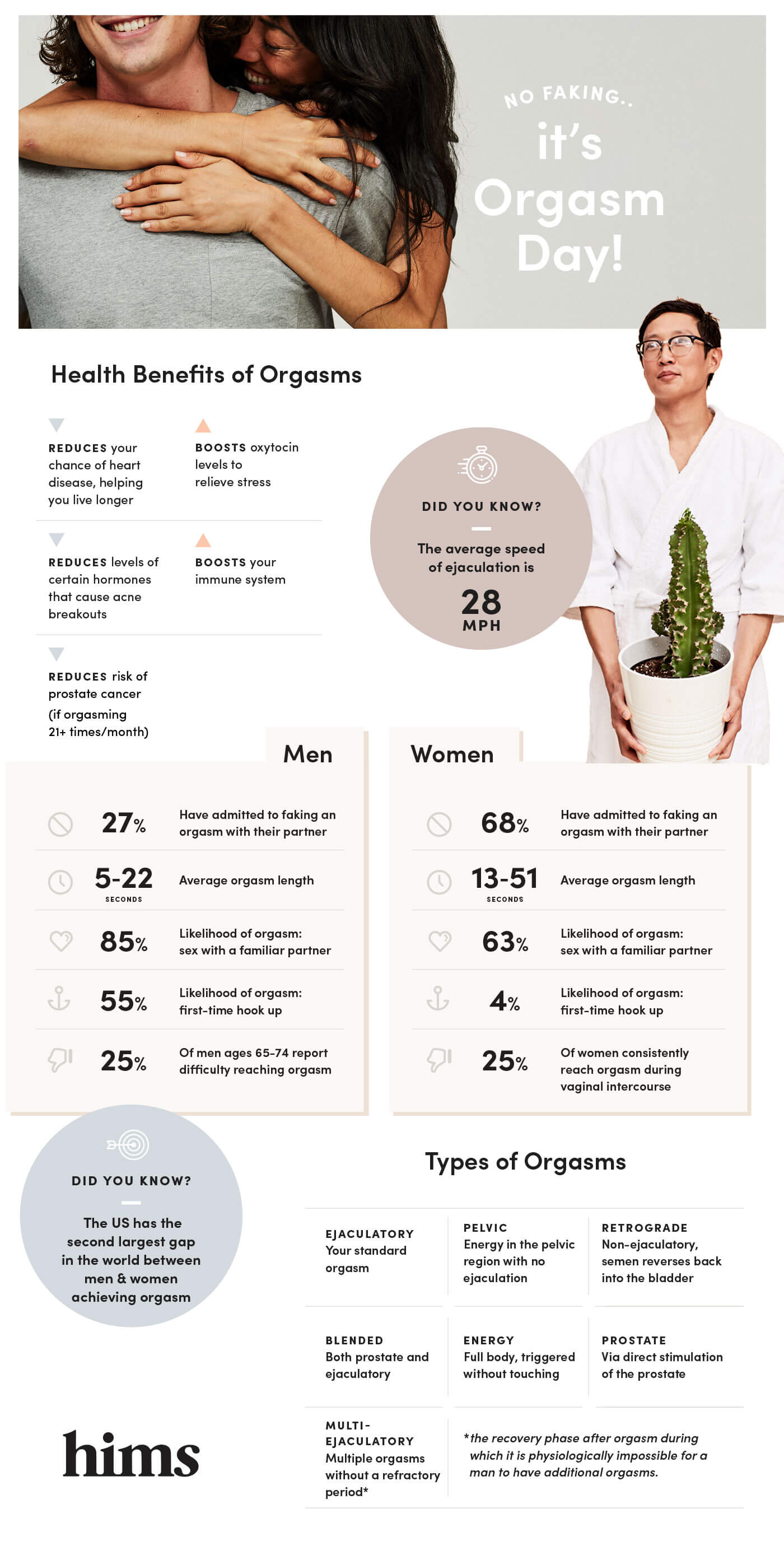 Sex is great, especially when capped with a happy ending (an orgasm, not an X-rated massage). An orgasm is a phenomenal health-boosting event, according to many studies.

An orgasm can boost your immune system by increasing the number of antibodies in your bloodstream, relieve your stress and help you sleep by releasing large amounts of oxytocin and other positive hormones, clear up your skin through the same release of hormones, improve your self-esteem and even reduce your risk of prostate cancer — if you ejaculate often enough.

Unfortunately, many people — most commonly (but not always) women — don’t get to enjoy these health benefits as often as they might want or deserve.

Don’t Fall into This Gap

The “sexual debt” Dantas wanted to repay is often called the “orgasm gap.” It’s the discrepancy between the number of men and women who consistently climax during sex, and it was most widely quantified by the Durex Sexual Wellbeing Global Survey of 2007-08.

Durex and research partner Harris Interactive asked more than 26,000 people in 26 countries about overall sexual satisfaction, orgasm frequency and the frequency of intercourse. As you can see in the infographic, the U.S. is tied for the second-largest orgasm gap of all countries surveyed. Forty-seven percent more American men than American women are reportedly having consistent orgasms during sex. The only country with a larger gap is Thailand, at 49 percent. Austria and Germany also have orgasm gaps of 47 percent.

These numbers don’t mean any other countries surveyed were doing particularly well at maximizing both partners’ pleasure. Countries with low orgasm gaps also tend to have low orgasm rates overall, meaning lots of people of both genders miss out on the big O at the end of the show.

For the more analytical among us, here are the numbers on the five largest and five smallest national orgasm gaps: 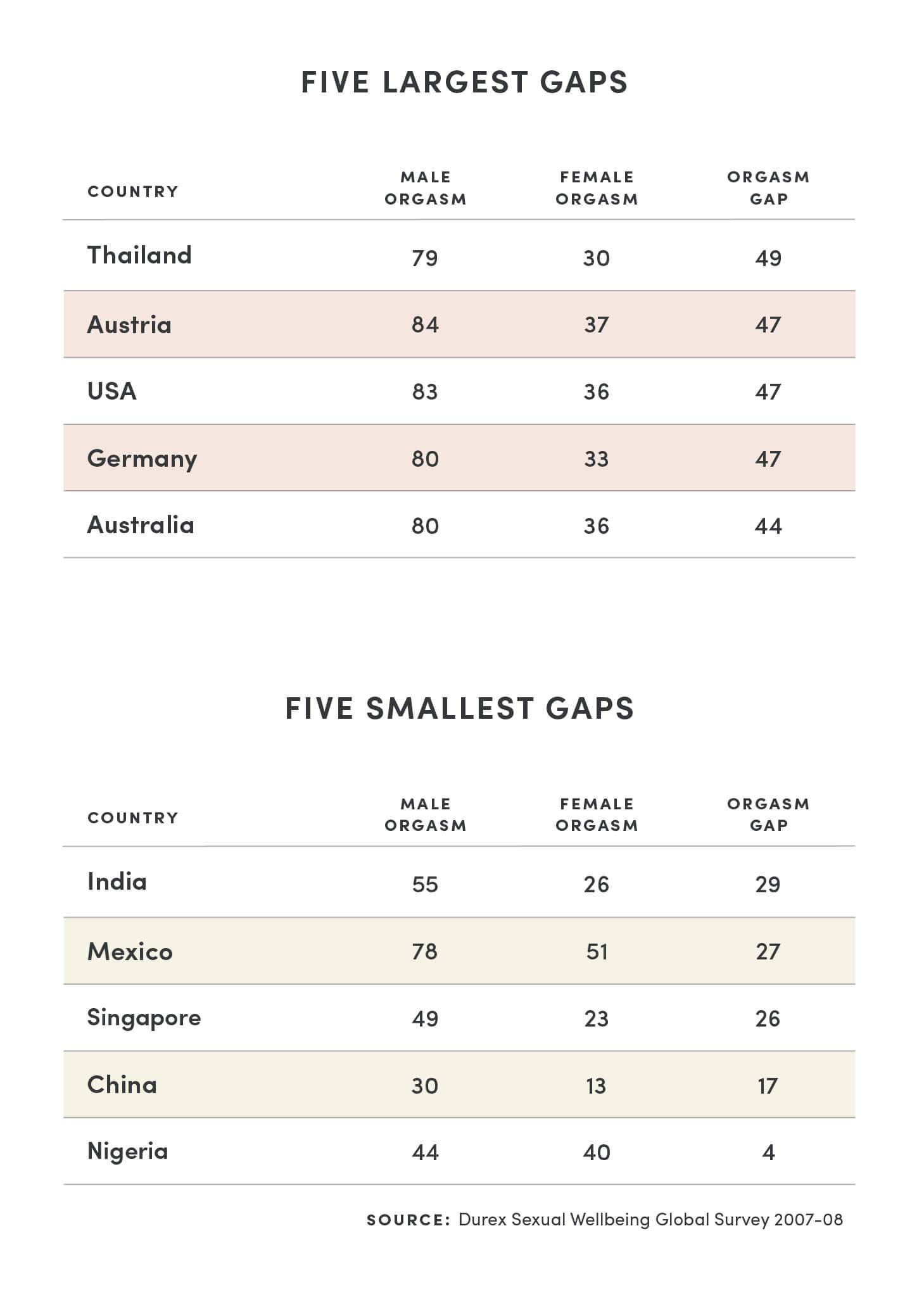 Every country involved in Durex’s survey reported an orgasm gap, and only two countries (Spain and Mexico) had more than 50 percent of their female respondents say they consistently reached orgasm at all. Around the world, about 63 percent of the men Durex polled always or almost always reached orgasm with their partners. Only 32 percent of the women polled could say the same.

Fake It 'Til You Make It

Surprised? You might need to pay closer attention, since 68 percent of women have admitted to faking an orgasm with a partner. Even if your female partner isn’t faking it, you might not be able to tell, since 43 percent of straight men can’t correctly identify their partner’s orgasms.

Consider the possibility that at least two out of three women you’ve slept with (if that’s your thing) were faking it. If you’ve been around the block a few times, you’ve almost certainly experienced this — in another survey, only four percent of women said they climaxed with a first-time hookup. The number of women consistently experiencing orgasms during sex rises quite a bit, to 63 percent, when with a familiar partner. Men, on the other hand, reported having an orgasm 85 percent of the time with familiar partners.

Not all men are automatically orgasmic, as you can see from the data above.

It’s somewhat remarkable to us that only 30 percent of Chinese men reported consistently reaching orgasm. There may be some cultural component to the survey’s responses, as East Asian countries reported the lowest rates of male and female orgasm across the board.

What’s the best way to improve the likelihood of reaching orgasm for both you and your partner? A great orgasm, like a great relationship, is built on communication.

There’s no one-size-fits-all solution to the orgasm gap because everyone is differently physically, psychologically, emotionally and yes, sexually. But communicating openly and honestly with your partner can go a long way towards ensuring both of you have an enjoyable and orgasmic sexual experience.

Communication might involve a conversation about each others’ sexual wants and needs, paying closer attention to your partner’s verbal and physical cues during sex or guiding your partner’s hands on your body — you know, like Patrick Swayze did with Demi Moore and a chunk of clay in that movie no one remembers anything else about. If you can identify particular physical issues, such as erectile dysfunction or premature ejaculation, hindering you and your partner’s sexual satisfaction, there are multiple ways to address those issues with effective products from hims.

Without communication, you’re literally just taking a stab in the dark (pun intended) at pleasing your partner. Communication requires trust, and unfortunately, we may be more willing to hop into bed with most people than we are to trust them with the knowledge of what we really like in bed.

You or your partner may not share your desires with each other out of fear of being mocked or ignored. We wouldn’t recommend remaining in a relationship in which you’re afraid of being mocked (in a malicious sense and not in a teasing way) or ignored. However, if you and your partner have good intentions, which you should, you’re likely to find each other more receptive to your wishes than you’d first expect.