Lifestyle
Back to Blog

How to Burn off Those Thanksgiving Calories with Sex

Loosen your belt. Go on. Slip that bad boy right off. Doesn’t that feel better? Get yourself nice and loose now. Don’t you want to keep going? Well, dive right in. Have another piece of pie!

After all, it is time for Thanksgiving, the single-most gluttonous day of the whole year for most Americans. It’s a time when they soothe the stress of the impending holiday season (not to mention the first of many family gatherings) with an estimated 3,000 calories in one gravy-covered sitting. Of course, with the addition of drinks and desserts that don’t suck (Pecan pie? Seriously, guys?), you could be looking at nearly double that caloric intake on T-Day.

Americans have a reputation for excess, and our waistlines prove it over the holiday season. Thanksgiving alone can boost an average American’s weight by 0.2 percent, and by the time New Year’s Eve rolls around, we’ve eaten our way into another 0.4 percent of weight gain.

Don’t want to carry around that extra weight  all winter? Well, good. Let’s talk about getting rid of those holiday-inspired (and possibly turkey-flavored) love handles with a form of exercise most of us can get down with: sex.

Want to make the most of your meal and convince someone you like to help you work up a sweat?

Check out our infographic, which will help you add a splash of science to your post-feast romp around the bedroom.

For reference, we based our calculations off the fact that sex burns 3.6 calories per minute. Now that you know how long you’ll have to go at it to burn off the various items on your plate, don’t you feel better about going to town on that extra pile of mashed potatoes? 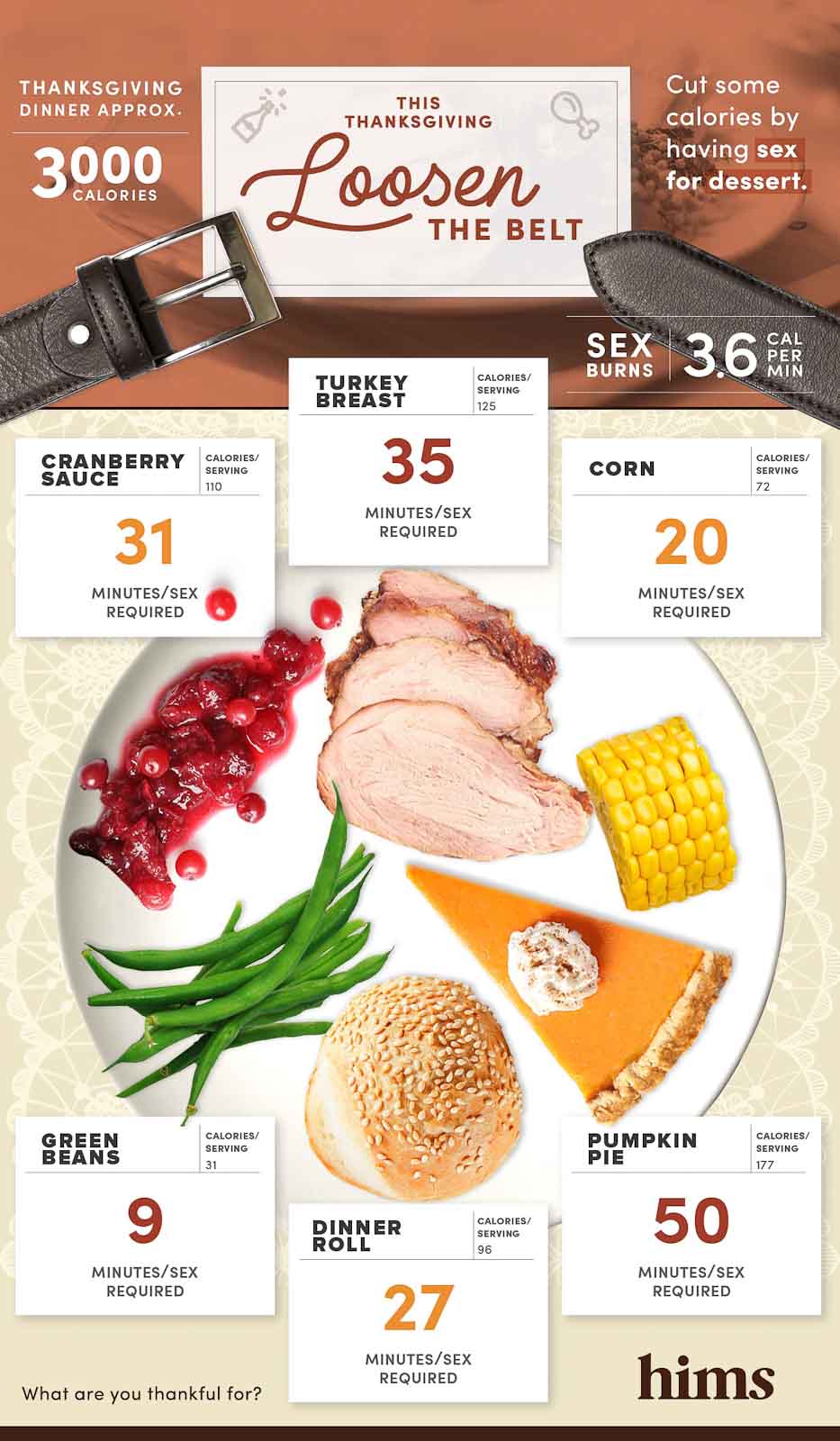 Ah, green beans. To some, they are the highly anticipated, fried onion-topped pile of mush we wait all year for (yet can never seem to make on any occasion other than the fourth Thursday of November). For the one-side-of-greens-per-meal evangelists, they’re the steamed bits of vegetation that make them feel a little less guilty for their otherwise gluttonous display of holiday consumption.

Don’t let green beans fool you. In their purest form — boiled, drained and salt-free — they clock in at only 31 calories per every cup. Start to add in the extras and you’ve got yourself a caloric stew brewing. For simplicity’s sake, we’ll stick with plain ol’ green beans, which require a quick but still respectable nine minutes of sexy time to burn off.

Cobbed, buttered, in little individual nuggets that get mixed into your mashed potatoes (unless you’re one of those people who can’t let their food touch — we’re not judging but we might be judging a little bit), corn is the healthy-ish sibling to green beans, appearing before the sudden drop-off into butter-covered everything and many shades of beige.

The thing about corn is that it’s a bit deceptive. At 143 calories per one cup serving, they pack quite a heavier punch than their green beaned cousins. Of course, if you want to feel better about it, you can pretend you're only interested in eating a half-cup serving, which clocks in at a stout 72 calories. But don't forget: these measurements are for corn without salt and butter (and who likes that, really?).

Half cup, full cup, buttered or plain, we still think you should heap the kernels on your plate. Even a 72-calorie half-cup portion means you get to fool around for another 20 minutes to burn it off, which is 20 minutes of "work" we're happy to do.

Get genuine Viagra with Hims. You'll never look back.

The mighty dinner roll. Not only does it taste freakin’ fantastic when slathered in butter, it might help you soak up that extra glass of wine that’s been egging you on into a political argument with your great aunt.

Despite their many scrumptious, buttery properties, there’s a dark side to these pull-apart tasties: they’re calorie bombs.

Think back to the last time you dove your hand into a basket of dinner rolls. You knew you’d be back for another. And then maybe (probably) another. Again, no judgment here, but know this: one standard dinner roll packs 96 calories. Given these numbers, it would appear that you’ll have to get a lot busier to put a dent in your caloric elimination efforts. For every roll you consume, you’ll need to indulge in 27 minutes of sexual pleasure to burn it off.

You know, the thing about turkey breast is that it’s inarguably the least sexy part of the turkey. It’s a little dry, sometimes a little bland and its presence is, let’s say, uninspired. We’re not here to knock turkey off its well-basted pedestal, though. In fact, when it comes to calories, this lean meat can actually boast some pretty great figures.

A three-ounce, gravy-free portion of turkey adds a mere 125 calories to your plate. On its own, or perhaps with a side of boiled green beans and maybe even a dinner roll, you’ve got yourself the spa menu version of our traditional holiday feast, but that kind of planning and deprivation is not what this sacred day is about!

No matter how you slice (carve?) it, plan to roll around the sack for 35 minutes for every portion you pile on your plate.

Is it dessert? Is it a side? Do people even really like it?

When in its purest form (aka half-inch thick circular slices that slide out after you give the bottom of the can a quick smack), a serving of cranberry sauce equals out to about 110 calories, depending on the brand. In sexy time time, that’s a smooth 31 minutes.

One (presumably very modest) slice is 177 calories, and since none of us ever eat just a modest slice, it’s pretty safe to assume you’ll be eating closer to 300 or 500 calories of artificially sweetened, crust-encased pumpkin delight.

No worries, though. All that pie means all the more time you get to romp around with the sweetest treat(s) of all: your partner(s). To rid your waistline of the aforementioned single, modest slice of pumpkin pie, expect to block out a full 50 minutes of your calendar — and make sure to set the event to “private.”

Feeling a little anxious about having to perform in the kitchen or in the bedroom this Thanksgiving? Don’t worry. We’ve got you covered (don’t let those juices run off too soon).