Only 58 percent of adult men in the United States get enough exercise — defined as 2.5 hours of moderate-intensity activity, or 75 minutes of higher intensity activity — each week. And more than a third (37 percent) of American men are obese. These two statistics are clearly related, but there are plenty of other reasons why men could use a push towards better health.

Why Don’t Men Go to the Doctor?

One major reason is simply that many men are too stubborn to admit they might have a health problem. Even when they do recognize the problem, they’re often unlikely to seek help until it’s too late.

Did you know that 60 percent of men don’t go to the doctor when they need to, even if they suspect they might have serious health issues?

It’s no wonder the average American man tends to die nearly five years earlier than the average American woman. Yikes! When women recognize that something might be wrong with their bodies, they’re more likely to take initiative in seeking medical care for the problem than men are.

On the other hand, 19 percent of men have admitted to visiting the doctor just so their loved ones would stop asking them about it.

A reluctance to seek medical help is just one of many (often self-made) problems men face in their journeys towards healthier lives. This won’t change if we don’t change the conversation, so let’s start talking.

Here are some of the biggest, scariest and most addressable statistics about men’s health: 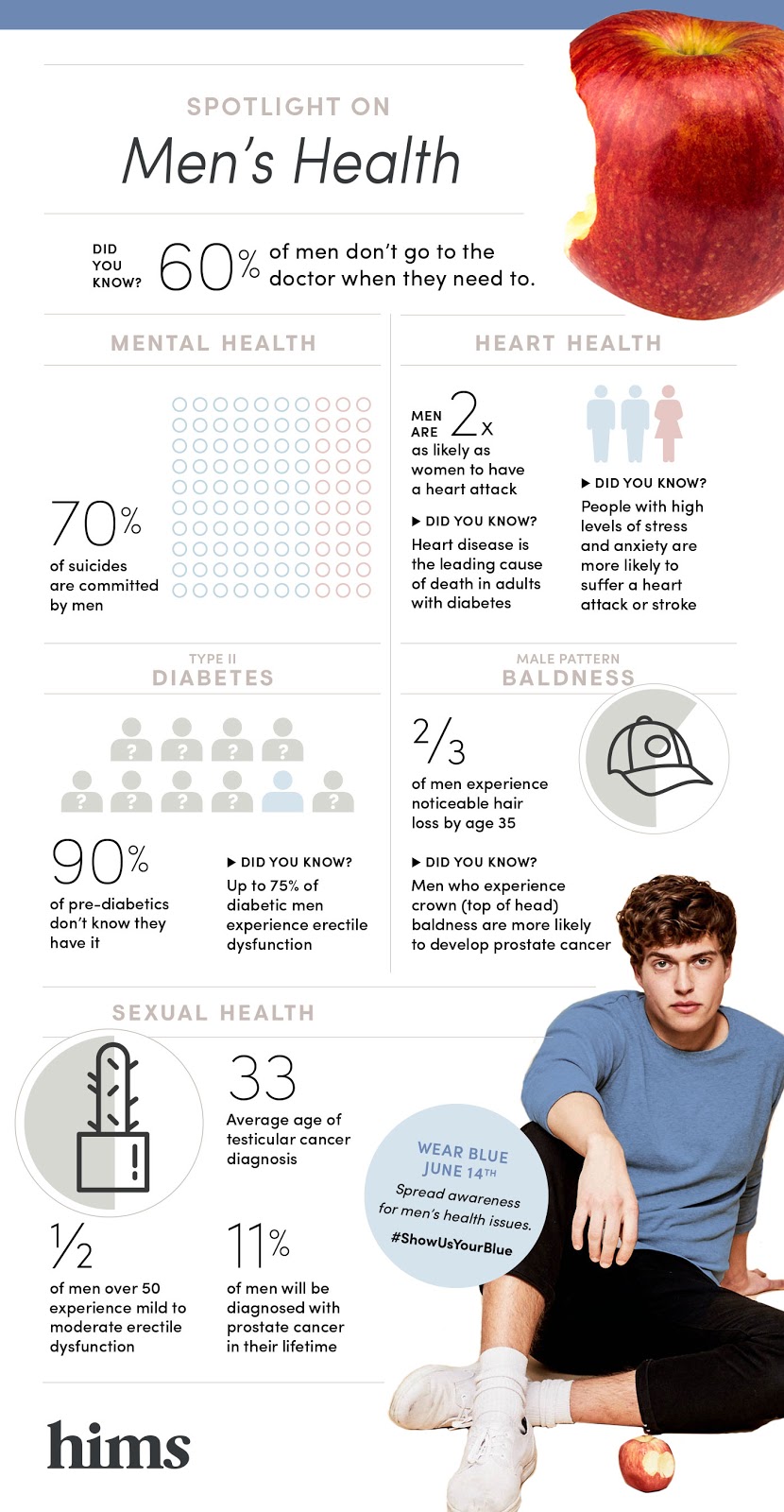 Listen to Your Heart (And Watch Your Weight)

You can’t ignore your health problems and hope they’ll go away. Unfortunately, many of these statistics indicate men have been trying to do just that.

It’s well-known that men are more likely to suffer heart attacks than women. A massive 34,000-person study conducted between 1979 and 2012 found men were twice as likely to suffer heart attacks as women, even after controlling for risk factors like high cholesterol (Fun fact: That steak we all love so much is packed with cholesterol.) and body mass.

Experts say they’re not sure why there’s such a big difference in heart attack risk between the genders, but if you read between the lines, men who won’t go to the doctor when they feel tightness in their chests or frequently become fatigue are undoubtedly increasing their own risk by not being proactive in addressing their health problems.

Heart disease and diabetes have many of the same underlying risk factors, but the biggest one is simply being on the bigger side. Obese men are more likely to suffer:

And let’s not forget about type 2 diabetes and coronary heart disease, too.

However, this classification has its drawbacks, including the fact that it’s based on the traditional Body Mass Index measurement, which isn’t absent of its own scrutiny. Either way you cut the cake, when you combine a bigger body with a smaller likelihood of seeing the doctor when something goes wrong with it, you’re only creating conditions more likely to escalate minor discomfort into real health problems.

Many men think it’s no big deal to carry around a spare tire, but statistically the numbers show otherwise.

Age is a numbers game. Win with skin care that works.

The stoic male provider, who defends his family from threats while securing its future with hard work and dedication, has anchored thousands of stories throughout human history. In these stories, the stoic man does many things, but he virtually never attempts to do what a modern man should: understand and address issues with his own mind and body.

To many men, threats and challenges are external problems, and their emotions and mental states are, at worst, temporary stumbling blocks on the way to victory. But depression, anxiety, addiction, stress and chemical imbalances in the brain are very real threats and challenges to a man’s health and well-being.

Men’s traditional resistance to seeking healthcare is often reinforced by societal biases, making men even less likely to seek out mental health care than they are to seek remedies for physical problems.

At least six million men in the U.S. suffer from depression every year, and many of these cases remain undiagnosed because few men seek professional help. At its worst, depression is truly debilitating.

Some men, like comedian Rob Delaney, have begun speaking out about the toll untreated depression can have on a man’s life, to raise awareness and prompt more men to seek mental health care. However, societal stigmas about men’s mental health can be hard to break, and many men remain stubbornly opposed to seeking help.

The Ultimate Downside of Not Seeking Help

Unfortunately, the resistance towards seeking help often leads to tragedy. Men account for at least 75 percent of all suicides in the United States. In fact, recent research shows that one man takes his own life somewhere in the world every minute.

There are many possible triggers for the feelings that might lead a man to consider suicide: the loss of a job or relationship, a sense of alienation or isolation, feelings of hopelessness in the face of major life challenges or simply depression caused by an unhealthy mix of hormones and chemicals in the brain.

Many men would never consider suicide, but they can still slip into things like addiction, alcoholism or other dangerous habits and choices. Roughly one in five men will become dependent or addicted to alcohol in their lives. In any given year, there are three times as many men as women suffering from alcohol dependency.

Simply getting enough shut-eye is a major problem for many men, as well. In fact, more than a third of American men don’t get enough sleep — at least seven hours a night. Up to 31 percent of adult men suffer obstructive sleep apnea, compared to up to 21 percent of women. The physical and mental health problems caused by a lack of sleep are so well documented that there’s an entire channel of TED Talks devoted to this single issue.

Some men turn to alcohol or drugs to knock themselves out. Others lie awake at night and wait, or dawdle or worse. Few men attempt to address any underlying cause, whether it’s stress, physical problems or chemical imbalances.

Ignoring stress often turns mental problems into serious physical ones. Stress can make you fatigued, raise your blood pressure, diminish your sex drive and give you stomach problems. When you’re stressed, you’re more likely to have a heart attack or stroke, as well as exacerbate a multitude of other health issues like asthma, high blood pressure, irritable bowel syndrome (IBS), and a weakened immune system.

Stress and depression are also closely linked to the “manliest” of hormones: testosterone.

Test-Ing the Limits of Male Health

It’s not only the driving force behind a man’s sex drive, it also plays a critical role in muscle development, fat storage, hair growth and even red blood cell production. Men naturally begin to produce more testosterone when they hit puberty, with men on average experiencing a lifetime “peak” in testosterone levels at age 19, a slight decline through age 40, and more variation after that.

Declining testosterone production and/or variation is a natural part of aging, but if a man’s body isn’t producing the right amounts of testosterone, it can lead to a wide range of health problems, such as:

A Little Too Much off the Top

Male pattern baldness is commonly thought to be caused by high testosterone levels, but the real culprit is often dihydrotestosterone, or DHT, a hormone produced from testosterone by enzymes in the body. DHT is primarily active in hair follicles, in the skin (where it causes acne outbreaks), and in the prostate.

The clear link between DHT, hair follicles, and the prostate is thought to be the reason why men who go bald at the top (crown) of their heads are 1.5 times more likely to develop prostate cancer than men who never experience this type of hair loss. This type of hair loss has also been linked to a greater risk of coronary artery disease.

On the other hand, receding hairlines at the front of the head tend not to indicate an increased risk of prostate cancer.

Two out of every three men will see noticeable hair loss by the time they turn 35. Luckily, there are multiple easy-to use treatments for hair loss.

One such treatment, finasteride, is also effective (and prescribed for) treating enlarged prostates, and it has been shown to reduce the risk of prostate cancer, as well.

This doesn’t mean you should skip your annual physical or ignore signs of prostate dysfunction if you take finasteride. If anything, men who take finasteride should be communicating regularly with their doctors to catch anything unusual as soon as possible.

Statistics can vary widely because the definition of “erectile dysfunction” may change from study to study. Many men may mistake temporary performance anxiety for an ongoing physical dysfunction.

However, there are a range of physical causes of ED beyond declining testosterone levels, including many of the health problems we’ve already examined. Cardiovascular diseases, diabetes, alcohol abuse, smoking, pelvic surgeries, obesity and neurologic diseases have all been linked to ED.

Simply losing weight or stopping smoking can have marked effects on the strength of a man’s erection — obese men were 50 percent more likely to have ED than men of normal weight, and a year after a man stops smoking, his erections generally improve by about 25 percent. But for many men, oral treatments in the form of sildenafil or tadalafil tablets are the best solution to this common problem.

We get it. You might not want to see the doctor. Maybe you, or the men in your life, think it’s possible to just tough it out, or that the problem will eventually go away on its own.

But there’s truth to the old saying, “an ounce of prevention is worth a pound of cure.” It’s far easier to treat health problems when they’re detected early than it is to try to tackle them after they’ve become major life-altering issues.

Talking to a medical professional about any health problems you or your loved ones experience today could not only extend life and improve quality, it could also save a lot of money and heartache over the long run. Tackling health problems early with therapeutic treatments or affordable medication — whether you’re dealing with issues on your head, in your head, in your chest or anywhere else in or on your body — is always a better solution than waiting until you have to call an ambulance and endure emergency surgery — or worse.

Listen to your body. If something seems off, don’t wait to seek help. And for the men in your life, make sure they mind their bodies and seek attention, in Men’s health month and beyond.