Happy Halloweeners! Your Guide to a Good Time on October 31

Looking for love this spooky season? How about someone to go home with? You’re not alone. In fact, if you’re looking for some sexy fun on All Hallow’s Eve, you might just be stacking the odds in your favor.

Halloween is an eerily popular time of year to do a little exploring and take a walk on our wild sides. According to Pornhub's Halloween Insights, phrases like “Halloween hottie,” “Halloween party” and “trick or treat” see massive search increases (6,820 percent, 4,665 percent and 5023 percent increases in 2018, respectively).

Users also begin hunting down costume, occupation and character-based videos in the days leading up to the spookiest night of the year, with big jumps for popular movie characters and classics like “bunny,” “zombie” and even “nun.”

However, all costumes aren’t created equal, and some approaches are likely to yield more success than others. If you’d like to make the most of your chances to come home with a treat on October 31, take a look at these tips: 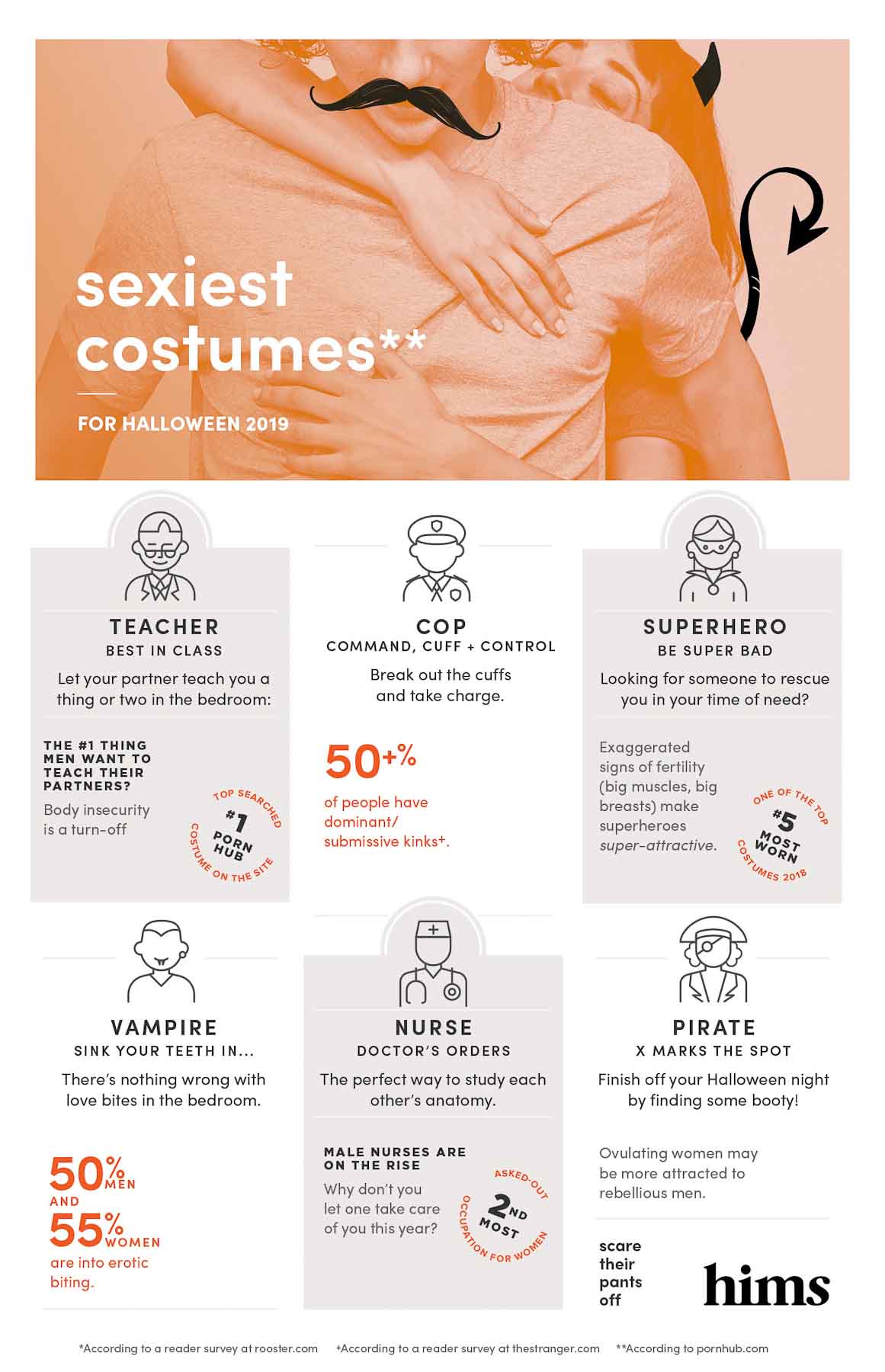 Conduct Some Research Before You Craft Your Costume

To be a hit with potential mates try wearing costumes they’re into. When it comes to attracting your mate, a little research can go a long way before you hit the Halloween supply store (you know, the ones that seem to pop up overnight?).

To really improve your odds, why not dress up as a clown cop who moonlights as a cable guy? How you decide to pull that off is entirely up to you, but that getup sounds like a winner to us.

It looks like Halloween night is a rare occasion where the odds are in your favor, boys. Get that clown wig on, pin on your fake badge and go tell a nice lady she’s got the right to remain silent before making her a balloon animal that represents your favorite sexual position.

A Halloween Costume For Every Body

Sexy superheroes of either gender, whether we’re talking about Captain America or Black Widow, can display extreme sexual stimuli due to their exaggerated physical portrayals.

Big chests, small waists, tight buns and beefy muscles (for men) are primal symbols of sexual desirability. However, this might diminish the impact of your comic-book costume if you haven’t put in enough work at the gym to emulate your favorite superhero. If lifting big and looking pumped aren’t your thing, you may want to consider an outfit less physically demanding to pull off.

Vampires and pirates are two classic Halloween costumes for guys looking to show off a little wild side without necessarily getting into Thanos-beating shape. Both characters give off a “rebellious outsider” vibe, with bloodsuckers representing a more refined rebel to the pirate’s rough-and-tumble image. These costume choices can be like catnip to the sort of partner with rebellious taste — or perhaps one who’s in the mood for a dominating charmer for the night.

Some ovulating women are drawn to the dominant, charming rebels — “sexy cads,” in the words of one Singapore Management University study.

Of course, you don't need to play the tough guy to attract someone new. Case in point? Male nurses. More men are turning to nursing as a formidable career than ever before, and since a nurse costume is super easy to pull off, why not try it on for your next Halloween party? Go show someone your caring side — or look for a new hunk to let show you his, if that's your thing!

Teachers are also a popular halloween costume. While you're out there teaching strangers a thing or two about chemistry, don't forget to teach them our favorite lesson: body insecurity is a turn-off, and confidence in your appearance is sexy. According to TheRooster.com's annual sex survey, the number one thing men wish their partners knew is that they don't have to be insecure about their bodies in the bedroom.

Don't Get Carried Away — Consent is Sexy

Once you’ve locked down your costume choice and made plans for a sexy and spooky evening, it's time to execute. Go out, have a good time and take it easy. And remember:

Whatever happens out there, don’t take every revealing costume as an invitation to get grabby. Anyone you want to hook up with will appreciate a respectful approach, capped by a confirmation of enthusiastic consent before you try to take things any further.

Remember: being good men starts with us.

Choose your costume wisely to play up the sexiest elements of your own personality, and pursue your hook-up (or romantic) goals with consideration for everyone. Consent is sexy, and a safe holiday is a happy holiday!